In 2009, a group of friends in the Decatur, Illinois area found common interest in board games. A club called “Decatur Gamers” was formed to help bring game enthusiasts together – to not only play games, but to meet and socialize. By 2011, it occurred to the club leadership that they were surrounded by some of the most talented and creative people in the area. Now, to find an outlet to leverage that creativity and “do good”. Because the group was already filled with game enthusiasts, it seemed only natural that games be part of the equation.

Searching for the “right” groups to receive games was very difficult – there are a number of groups that would benefit from board and card games. One day, purely by chance, one of the group’s founders stumbled across this photograph: 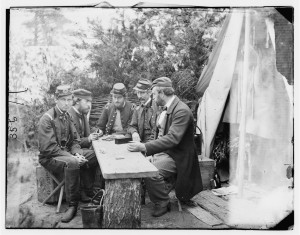 The group began reading about the lives of Civil War soldiers, and how boredom played a large role in their daily lives. It was even discovered that famous game publisher Milton Bradley specifically marketed to Civil War soldiers – “We are dying with monotony and ennui.”

Research showed that playing games to reduce boredom was something that soldiers have done from the Roman era through modern times. 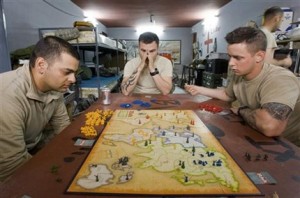 U.S. Army soldiers with the 293D Military Police Company, 97th Military Police Battalion, play board game ‘Risk – The Game of Global Domination’ as they relax at a local police station on the outskirts of the town of Kandahar, southern Afghanistan

It was decided that the group would organize to help alleviate the boredom of the men and women serving in the US Armed Forces, and Games For Troops, Inc., was underway.

Everyone involved with Games For Troops is an unpaid volunteer. We recruit people who are genuinely interested in the project, and who are willing to give their time and talent without compensation. This allows us to use our funds more efficiently and wisely.

Help Us Help Them

Your donation will directly support our mission of providing board, card, and other games to the men and women of the US Armed Forces.